By setting the furnace to be just 1 percent less hot, Holland Malt can save enough electricity to power a small village for a year. Data science and modeling are helping the malting company reduce its carbon footprint. 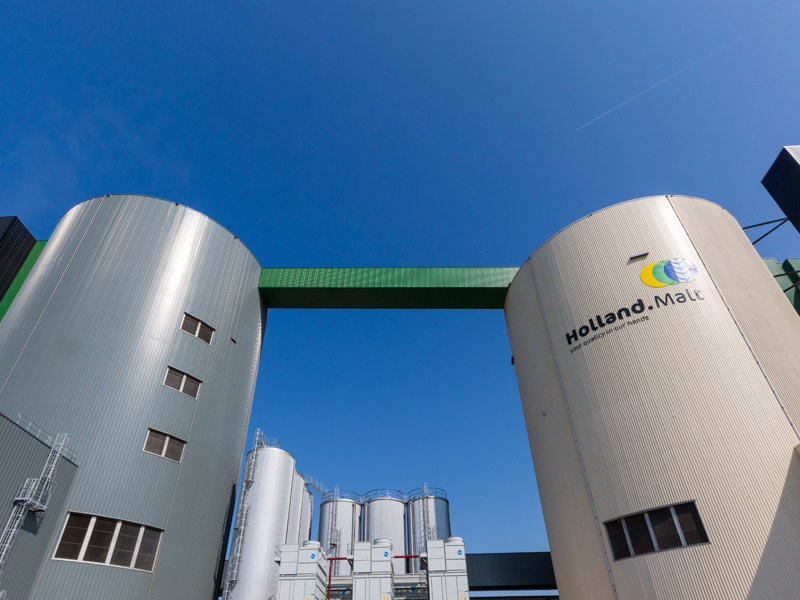 By controlling the production process, energy can be saved, which reduces costs and also benefits the carbon footprint.

Without malt no beer. This main ingredient is made from grain such as barley. When the grain arrives at the malting plant, it is first cleaned to remove dust and other foreign matter. Then it is soaked with water for a day to raise the moisture content to 40-45 percent. This soaking triggers germination in the grain, breaking down the cell walls and developing enzymes that convert the starch into the sugars needed to form the alcohol. After five days, the green malt is transferred to the kiln, where it is dried to reduce the moisture content to less than 5 percent. This stops germination and prepares the malt for brewing.

"An ester is a very large oven," explains Martijn van Iersel, manager of quality and technology at the Lieshout-based malt house Holland Malt. "The green malt is spread out on the floor, after which large fans blow hot, dry air over it. The passing air cools and absorbs some of the moisture from the grains. For each batch, we have 20 to 22 hours to complete the drying process and get the malt ready in time for transport to the customer, the brewery."

One of Holland Malt's biggest customers is parent company Swinkels Family Brewers, also based in Lieshout and known for the Bavaria brand. "If you compare all the processes in a malting plant, kilning is the most energy-consuming," says Pieter Meeuws, business intelligence & reporting analyst at Swinkels. "As we are committed to corporate social responsibility, we decided to see if we could build on our growing data science competence and reduce the electricity bill using a data-driven approach. A 1 percent reduction would already save enough energy to power a small village like Lieshout for a year."

"Because we are committed to corporate social responsibility, we decided to see if we could build on our growing data science competence and reduce the electricity bill using a data-driven approach. A 1 percent reduction would already save enough energy to power a small village like Lieshout for a year."

Building on their existing relationship, Swinkels turned to Bright Cape's data science consultants for help. "We did a project with them in Ethiopia," Meeuws gives an example of their earlier collaboration. "After we set up a greenfield brewery there, they helped us run a successful data-driven marketing campaign to best promote our new beer. When we contacted them on behalf of Holland Malt, they supported us again with their data science expertise." For Bright Cape, based in Amsterdam and Eindhoven, the Holland Malt project aligns nicely with its areas of focus. "We develop advanced data science solutions, ranging from exploration to user experience," explains senior data scientist Daphne van Leeuwen. "We are particularly active in finance, logistics and manufacturing, with an increasing focus on sustainability." The project also aligns with the efficiency and sustainability goals of the High Tech Software Cluster, which brings together Bright Cape and other software specialists to pool, promote and apply Dutch software strengths on a global stage.

The goal of the project was to kiln a batch of malt within the required time frame of 20 to 22 hours while delivering the same high quality with the lowest possible energy consumption. "Due to the different grain sizes and shapes, different barley types have different moisture contents and thus different drying times. The conditions outside the kiln also play an important role. When humidity is low, for example in winter, some batches can be ready after only 15 hours."

knows Van Iersel. "Until recently, we set the fans to full power, regardless of the conditions. However, if we were to set them a little lower, so that the same batch takes 20 hours to dry, we still stay within the set limits and have used less energy."

"Holland Malt already had many impact variables readily available, such as the humidity and temperature in the kiln, the shape and size of the barley and the layer thickness of the green malt," Van Leeuwen hooks up. "We processed that data, combined it with external factors such as outside air humidity and temperature, and put it all into a model that, given a set of boundary conditions, predicts as accurately as possible how long it will take to complete a batch. Holland Malt can use this prediction to turn the knobs on the kiln, giving them new data that they can use to improve the model and get an even better prediction."

Holland Malt is now engaged in extensive trials. Van Iersel: "We are seeing a number of promising results, which confirm that the model can indeed correctly predict the drying time. We are approaching the point where, under the right conditions, we can turn the heating down a notch and actually start saving energy. At the moment we are still tweaking manually. Eventually, of course, we are going for a self-correcting model."

The project began in February of last year and ended in January of this year. Holland Malt is now engaged in extensive trials. Van Iersel: "We are seeing a number of promising results, which confirm that the model can indeed correctly predict the drying time. We are approaching the point where, under the right conditions, we can turn the heating down a notch and actually start saving energy. At the moment we are still tweaking manually. Ultimately, of course, we are going for a self-correcting model."

"We're also looking at whether we can optimize several furnaces at once," adds Meeuws. "Holland Malt has four of them and we're looking at whether we can put them in a row in such a way that we can reuse their residual heat more efficiently. It's about how we can make the best use of the model, how we can make the most of it that we have more control over the process."

The project has opened Van Iersel's eyes to the possibilities of data science and modeling. "It's really remarkable what you can achieve," he thinks. For Meeuws it was a confirmation that you can never have enough data: "Holland Malt already recorded a lot, but the project showed us that we still had some blind spots. So collect as much process data as possible, even if you don't yet know what you're going to need it for."

Successful implementation of data science hinges on acceptance by the business community; therefore, it is critical that technologists and decision makers be involved in the process from beginning to end.

Start small, deliver well - it is important to carefully delineate your use case in the beginning and coordinate extensively with the experts to understand their needs.

Bright Cape makes data accessible to everyone. And not just insight, but a practical solution that adds immediate value. Bright Cape provides the insight and the solution. We always do this together with our client as one team.